There has been a bridge across the River Thames in London for nearly 2,000 years. The first “London Bridge” was built by the Romans in 43 A.D. They built a temporary pontoon bridge which was planks laid across a row of anchored boats, or they may have used ferry boats.

The next record of a bridge was 984 when a report was recorded of a widow and her son who had driven pins into the image of a man. The woman, who was thought to be a witch, was taken to the London Bridge and drowned while her son escaped. This bridge was built out of wood.

In 1014, when the Danes held London, the Saxons, under King Ethelred The Unready, were joined by a band of Vikings from Norway led by their King Olaf. Together they sailed up the Thames to attack the Bridge and divide the Danes. wBut men protected their ships with the thatched roofs pulled from the cottages that stood on and over the London Bridge. They rowed up under the bridge, put their cables around the piles which supported it, and rowed off at full speed, pulling the bridge down. The London Bridge once again had to be rebuilt. 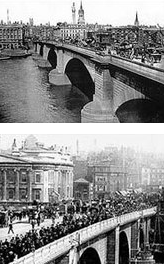 In 1176, the first stone bridge was built under the direction of Peter Colechurch. It was common in those days for men of the cloth to design buildings as they were taught the art of building arch structures out of stone in the Monastic Orders. wCompleted in 1209, this new London Bridge took 33 years to build and lasted more than 600 years. It had a road 20 feet wide and 300 yards long. It was supported by 20 arches which curved to a Gothic-style point. There was a wooden drawbridge on the bridge to let ships in and keep invaders out. The flow of the water was used to turn water wheels below the arches, first for grinding grain and, in 1580, to pump water into the city.

People and merchants began building houses and shops on the well-built stone bridge. It was soon completely covered with buildings. In 1212, a disaster occurred when a crowd of people were trapped on the London Bridge between two fires. Many were burned to death. There was a Stone Gate House on the bridge and on its roof stood poles where traitors’ heads were placed. This practice started in 1304. Oliver Cromwell’s head was placed on one of the poles 350 years later.

weIn 1577, Nonesuch House was built to replace the drawbridge, stretching across the bridge with a tunnel running through it at street level. Nonesuch House had a framework of timber, part of which was shipped from Holland. Not a single nail was used in its construction.

Fire again struck the Bridge in 1623. This fire started when a maidservant left a pail of ashes under wooden stairs. Forty-three houses were destroyed and many of the shops were also burned and damaged. Soon the merchants began moving, as the bridge was getting dilapidated.

By 1657, all the houses were pulled down. The bridge was widened and partly rebuilt with a wide center arch. The Bridge stood like this for years until 1831, when another New London Bridge was opened.

In 1821, a committee was appointed by Parliament to consider the condition of the bridge. The arches had been badly damaged by the Great Freeze, so it was decided to build a new bridge. Plans were submitted and rejected. This bridge would have to be quite different from the previous London Bridge as the old prints were for horse drawn carriages. In 1824, John Rennie’s plans were accepted. wThe bridge was built 100 feet west of the old bridge. The River Thames narrows to 900 feet at this point.

On June 15, 1825, the first stone was laid by the London Mayor of London, John Garratt, in the presence of the Duke of York. Six years later, William IV and Queen Adelaide opened the New London Bridge and the old one was demolished.

This London Bridge was built out of granite which was quarried on Dartmoor. It was a structure of 5 arches, and its overall dimensions were 928 feet long and 49 feet wide.

The new bridge, wide and spacious was busy at once and even more so when the railways came to London, and London Bridge Station opened just south of London Bridge. Soon a new bridge user, “the commuter” joined the bridge’s traffic and thousands crossed Sir John Rennie’s bridge everyday and became its most familiar scene.

In 1902-04, it was widened by means of corbels, increasing the space between the parapets to 65 feet and the footpath to 15 feet.

In 1962, it was discovered that the London Bridge was “falling down,” sinking into the Thames because it was not adequate for the increase in traffic. The City of London decided to put the 130-year old bridge up for auction, and construct a new one in its place.

Robert P. McCulloch, founder of Lake Havasu City, AZ, submitted the winning bid for $2,460,000 in 1968. McCulloch spent another $7million to move the London Bridge to Lake Havasu City which took a total of three years.

The bridge was shipped by boat 10,000 miles to Long Beach, California. From there, it was trucked to Lake Havasu City where it was stored in seven-acre fenced storage compound. On September 23, 1968, the Lord Mayor of London, Sir Gilbert Inglefield, laid the corner stone. Robert Beresfornd, a civil engineer from Nottingham, eeeeeeeeeeeeEngland was in charge of the reconstruction of the London Bridge in Lake Havasu City.

As a guideline, he had a copy of the original plans drawn by John Rennie. During the reconstruction, Mr. Beresford drew sketches of the bridge in different phases of construction. There are a limited number of these prints. When Mr. Beresford returned to England, he gave exclusive right to D & P Antique in Lake Havasu City to sell these prints.

Each piece of the granite bridge was marked with four numbers: the first indicated which arch span; the second, noted which row of stones; eeeeweand the last two indicated which position in that row. It was discovered while dismantling the Bridge, that there were code numbers on each stone when it was originally built: Rennie must have used the same system when the sections left the quarries.

Construction of a new bridge over the River Thames coincided with the dismantling of the old London Bridge. The new bridge was built directly over the old bridge. This new construction was managed in such a way so that London never lost one day of traffic while transferring from the old bridge to the new one.

Reconstructing the London Bridge in Lake Havasu City was done in the same manner as the Egyptians built pyramids. Sand mounds beneath each arch were carefully formed to the profile of the original bridge arches, serving the same function as molds. When work was completed the sand was removed. a one-mile channel was dredged and water was diverted from the lake, under the Bridge, then back into the lake.

The reconstructed London Bridge was dedicated in Lake Havasu City on October 10, 1971 with many British and Arizona officials participating in this event that drew 50,000 spectators.